Inspired by Calvino’s fictions based on Tarot cards, 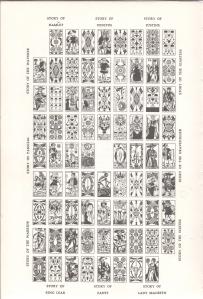 (see right) I wondered if I could create an approach to narrating place based on shuffling the 54 ‘stories’ collected in the marketplace. I have made a still from the photographed object which relates to each story and created a set of cards from these.

I then placed the cards into rows and columns by associating the images, to create a series of new ‘stories’ from the different objects and images. I’ve made a short animation of this process: http://www.vimeo.com/27366963 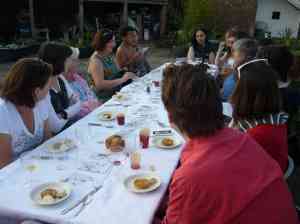 We also used the set of cards as part of the Dinner Party Performance last weekend at Brockwell Park Community Greenhouses. Dinner guests were asked to select a card at random which related to the climate of each ‘course’, and read the selected quotation.  It was interesting to see the random conjunction of reader and story, strangers taking on the voices and destinies of others.

I met architectural historian Yat Ming Loo last week and we discussed how writing can be a form of architecture, re-shaping the identities of places. I want to try using the cards as a way of exploring and narrating place/making a collective biography. I am reading Locus Solus, by Raymond Roussel, which he wrote using a strategy of formal constraints: “I chose two similar words. For example billiards and pilliards (looter). Then I added to it words similar but taken in two different directions, and I obtained two almost identical sentences thus. The two sentences found, it was a question of writing a tale which can start with the first and finish by the second…”