The next morning before leaving Figueira, we pass an old shop with strange window displays combining typewriters, tins, dolls and plastic flowers. Inside Casa Encarnacao (which is a functioning grocery store) we have a coffee and Pastel de nata and the shop guy tells us his story. He has been here 4 years, was born in Angola but his parents came back in 1975 and they have never been back. When they moved to Figueira, they didn’t know anyone and just landed up living in a building in a street, which he later found out his great-grandmother had lived in. ‘Its a small world’ he says.

We set off up the coast hitting a very slow and bumpy road and eventually arrive in Aveiro, again crossing a wide river inlet. The water is channeled through the city with canals, and old Art Nouveau and traditional tiled houses line the banks. Our host Ani lives in one of the few tower blocks in the city and she invites me to come and see the view from the top – which is breathtaking – looking north, a patchwork of endless water-fields, once all salinas, stretching as far as the eye can see. In the distance, we can see fires, which Ani, who is a social worker, says are lit by people who are suffering mental health problems due to the current economic situation. She says her husband and friends are trying to set up a project to run nature walks through the water-fields, to encourage more tourism and growth in the area.

On ground level, crossing the canal to the Marinha do Troncalhada, we visit one of the few remaining functioning salinas out of that maze of shallow water-fields. This is another eco-museum, although it seems to be mainly a productive space with huge mountains of salt lining the canal banks. Joao and Maria, who are friends of Joao who runs it, and they come down to help him as his wife is in hospital. Maria speaks English with a Canadian accent and it turns out she was a returnee, having emigrated aged 9 but returning aged 23 to marry Joao as his family-owned hardware store in Aveiro needed him. She said she always felt a pull between the two, and felt there was something different about her. People emigrate to better themselves, she said, and if they haven’t succeeded, they don’t come back.

There have been salt pans here for 900 years, Maria says, and the fishermen used to take the salt, catch fish, salt it on board, and bring it back. So salt cod became essential to the Portuguese culture and traditions. Today, fish is imported, frozen. Its then defrosted, salted and repackaged as a local and global export. But the salting is not necessary for its preservation, so why continue to produce it? As Maria says, ‘We like the taste. We’d rather have that for our cooking.’ Even as global cod stocks dwindle and the fishing trade may no longer be run by Portuguese sailors, cultural preservation and memory prevail. 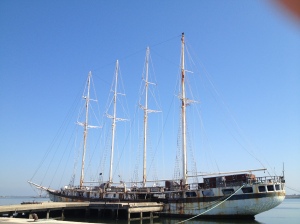 Before we leave Aveiro we drive out to the Gafanha Da Nazare, where the bacalhau is produced today in huge warehouses. A rusting sailing ship sits by the dock, now only used for tourism purposes.

I find the company that produces salt cod which is sold in Brixton market. We can’t see inside but Rita who works in the factory, says it is all industrially processed now anyway, its not like the old days of laying it out on racks to dry.

Salt seems to belong to a different time, a slow time of processes that take days, not hours. The slow time of producing place, community, social life. The slow time of sea travel, and the slow adaptation of cultures to each other. Technology allows salt and salt-cod to be produced faster, but it lacks the complexity, or authenticity, of the slower-made product. It allows people to move faster, build faster, but what does this do to the culture of our cities?