It’s been a busy few months. In July, I visited Margaret Rowley, who holds the Max Sinclair archive of canal related photographs and ephemera. Max’s son Iain and fellow Ring artist Heather Wastie joined me and we looked through an amazing collection of images. I was fascinated by the images of industrial Droitwich, with Vines Park covered in Victorian industrial buildings (saltworks). I also saw images of the ‘wych barges’ or trows that used to travel on the canal, moving salt from Droitwich to the docks at Gloucester and Bristol for onward travel. There was even a drawing of the special designs of the boats which made me realise how unique these vessels must have been and what a sight it would have been to see boats with sails along the inland waterways of England. The wych barges were a special type of trow, which had a tabernacle mast, so they could pass under the bridges of the canal, but also have a sail rigged to assist their passage. They could sail the river Severn out to sea and even across the channel.

from the Max Sinclair archive 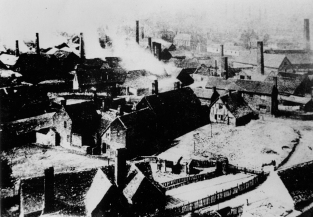 Later in the same trip, I met Paul Jones, a local historian and photographer. He showed me his collection of digitized photos some of which he had collected from the archive of a local women called Nelly Copson, who he had known well and who had told him many stories about Droitwich. The photographs included the Saltworks in Droitwich, salt workers, and the salt products packed up for sale and transport in many forms. It was hard to believe how many people’s lives were tied up in making salt. 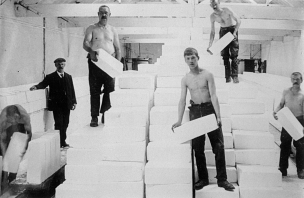 In October, I visited the monthly meeting of the Droitwich Arts Network where I presented my work in progress for The Ring and also carried out my specially designed salt-themed pub quiz, the ‘Brineteaser.’ This went down well with the D.A.N. members, and a serious attitude was made towards winning, although there were a few giggles when I asked them to guess the origin of the proverb: “Eternity makes room for a salty cucumber.”*

Meanwhile, I’ve been at work in my studio in Brighton, experimenting with salt. I’ve been making salt blocks and forms and also placing different objects in salt solution to see what results. The results are often unexpectedly beautiful. Over time, crystals form, transforming the original object.

Image: Salt crystals in my studio

As I’ve been developing my idea for the Ring next year all this research has combined to form a proposal, which I have now had the good news has been accepted. The final artwork will be event-based, taking place over a series of events in Spring/Summer 2018 which coincide with local festivals. The event will begin with a Canal barge journey from Gloucester Docks to Droitwich, arriving in Vines Park, Droitwich at the St Richards Canal Festival. This journey, using a heritage working boat, will re-enact in reverse the last journey of a wych barge along the Droitwich canal, which according to Max Sinclair took place in 1916, carrying hayricks for the army in France.[1] ‘Bow hauled by men chanting sea-shanties, she was loaded at Mildenham Mill with two hayricks commandeered by the army for feeding horses in France.’[2] 2018 is the 45th anniversary of the start of the restoration of the Droitwich canals, and 100 years since the end of World War 1,[3] and St Richard’s festival will also be celebrating of the life of Max Sinclair.[4]

The barge will be loaded up with salt from all over the world at Gloucester Docks, and then when the salt arrives at Droitwich it will form part of a salt pavilion which along with the newly produced Droitwich salt becomes part of an International salt collection. After the event, this display will be taken to the Salt Museum at Droitwich Heritage Centre where it will be on display over the Summer. In September 2018, as part of Salt Fest, the salt pavilion will return to Vines Park and be loaded back onto a barge for its farewell journey. As part of the project I will be making a film of the journey and a special limited edition map of the salt connections to and from Droitwich, both past and present. I’m looking forward to next year and seeing all these plans come together…

*It’s Russian, if you were wondering.